Get ready to round up your friends! Event organizers announces the first wave of the musical lineup and performers for the 2nd Annual ‘Black And Yellow Fashion Affair’ which is set to take place in PHOENIX this year on MAY 7TH. Artists include Liberian super star SAGA AP, Local Afrobeats/HipHop Artists Black Starx and LEA ‘Best New Artist’ Nominee Xten.

The artist lineup is pretty PHOENIX heavy in comparison to the previous year, and it was also noted that the DJs as well were carefully hand picked for this event. The DJ lineup includes DJ Lady Staliet from Phoenix, DJ Bree-z from Tucson and from Minnesota DJ RayBandz. 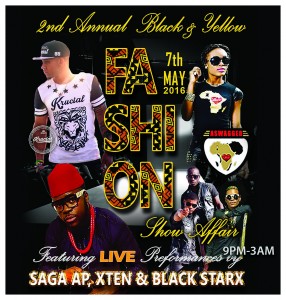 The Fashion Show Affair lineup was announced when the flyer was posted on the event’s official Facebook on March 3rd. On Twitter and Facebook, some FASHION SHOW AFFAIR fans posted their respective wish list for additional performers. A few names mentioned were… new local Afro Dancehall Artist SHAWNQWELL and Liberian musical sensation TOGAR HOWARD. Organizers though remained tight lip on any add ons did promise a few surprise announcements as the show comes closer to date.

The BLACK AND YELLOW FASHION AFFAIR will be held on May 7th , 2016, at 3650 W. Glendale Ave, Phoenix Arizona. For ticket details and other information, take a look at the Event’s Facebook Page . Tickets will be available this Friday (March 11) at 9am.