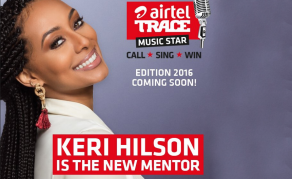 The Kenyan winner stands a chance to win Ksh 1.5 million at the Kenya finale and thereafter, qualifies to compete in the grand finale where the ultimate prize comprises a mentorship program with multi-award winning American singer-songwriter Keri Hilson in Atlanta. The winner will not only star in their own music video alongside Keri Hilson; he/she will get an opportunity to record a duet with the “Knock You Down” songstress, as well as receive a signed contract with a major music label and worldwide media exposure through various TRACE’s platforms.

ATMS competition will run until 11h June 2016. The competition is only open to Airtel subscribers. Numbers ported to Airtel will also be eligible for entry.

The grand finale will be held in Lagos in June this year.