Home artists #MyAreaVibe | Is Diamond Platnumz using witchcraft? See what he had to...
artistsCELEBSHot Newsrecent

#MyAreaVibe | Is Diamond Platnumz using witchcraft? See what he had to say after a human skull model was found in his office. 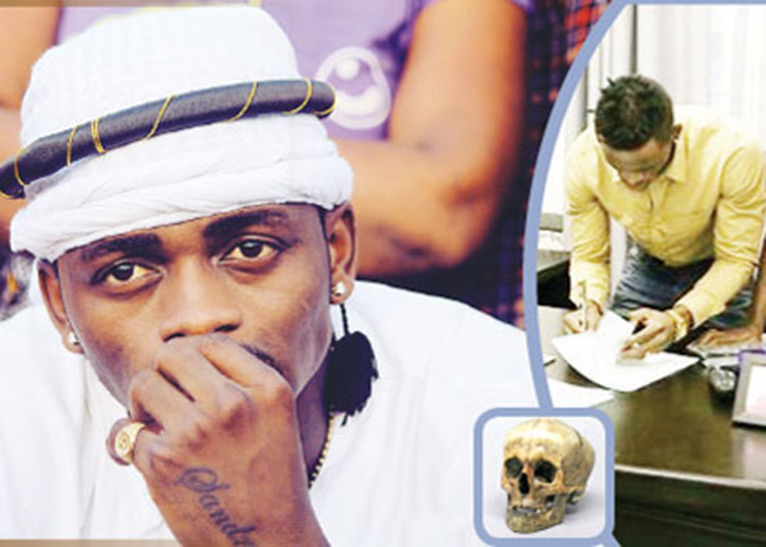 Top Tanzanian singer Diamond Platnumz has refuted claims that he engages black magic to succeed in his music career.
Allegations that the Make Me Sing star is using witchcraft to achieve success in music have been leveled against him by sources that had a glimpse of his WCB office table when he was recently signing a deal with a tomato sauce manufacturer.

On the table in his Mapambano-Sinza office; was a golden model of human skull, among other things.
“The human skull model on the table of Diamond Platnumz’s office shocked us,” a source told Tanzania’s Risasi.
Another source who witnessed Diamond Platnumz sealing an ambassadorial deal with the tomato sauce manufacturing firm, said the revelation has sparked speculative discussions among him and his colleagues.
“Many are claiming that the skull symbolizes witchcraft activities that the singer could be engaging in; others are saying that the skull indicates that Diamond Platnumz could be a Freemasons member. Some are speculating that either of the two (spell-craft or being a Freemasons member) could be logical explanation to Diamond’s massive wealth. He is, however, in a better position to say the truth.
“Sculptures like this (human skull) will make his fans cast doubts on his source of wealth and music success,” observed another source.
Diamond says that the human skull model on his office table is just a decoration and has nothing to do with witchcraft.
“I won’t lie to you; no human being or force can uplift someone to top levels other than God. I pray a lot and depend on God for everything and He surely fights my battles.”
“Many have said that I use witchery to succeed; but the truth is I rely on prayers, creativity, determination and discipline. Those are the factors that can guarantee one success in everything that he or she does,” said Diamond Platnumz.