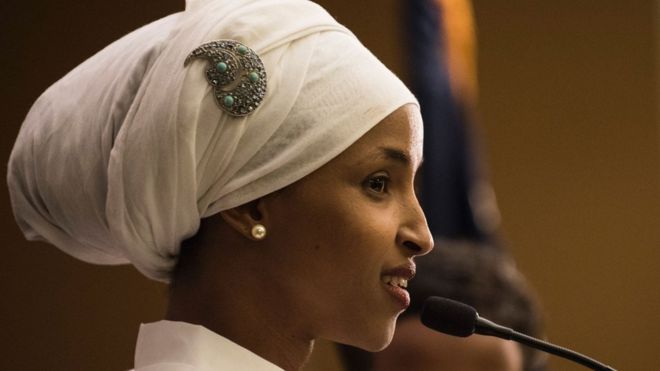 Ilhan Omar, 34, has made history by becoming the first Somali legislator in the United States.
A former refugee, the Somali-born activist has been elected to serve as an MP in the US state of Minnesota.
The Muslim Somali-American woman becomes the highest-ranking Somali elected to office in the US.
Her election comes just days after US President-elect Donald Trump accused Somali immigrants in Minnesota of “spreading their extremist views”.
Minnesota has the nation’s largest Somali community – about 50,000 according to the US census.

Celebrating her victory, Ms Omar said she would be the “voice for the marginalised” in the state parliament.
“I think I bring the voice of young people. I think I bring the voice of women in the East African community. I bring the voice of Muslims. I bring the voice of young mothers looking for opportunities,” Minnesota Public Radio quoted her as saying.
Ms Omar escaped from Somalia with her family at the start of the civil war when she was eight years old.
They lived in a Kenyan refugee camp for four years, before moving to the US and settling in a Somali-American neighbourhood in Minnesota.
‘Proudly wears the hijab’ Standing for the DFL coalition, which is affiliated to the Democratic Party, Ms Omar won a seat to represent District 60B in the state legislature.
She faced nominal opposition after her Republican opponent who had withdrawn from the race for family reasons.
During a primary in August she unseated one of the longest-serving members of the Minnesota legislature.
Minneapolis’s Star Tribune newspaper described her as a “Muslim-American woman who proudly wears the hijab”, saying she had been “suddenly thrust into leadership of a rapidly emerging DFL coalition that is younger, more urban and more racially and ethnically diverse than at any time in its history”.