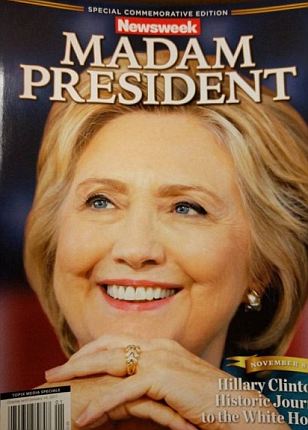 A news magazine has come under fire for printing special ‘Madam President’ souvenir editions before election day and sending them to stores, but not Donald Trump versions.

Tony Romando of Topix Media told Snopes that what had unfolded was simply a business decision: ‘For the past six months Newsweek Special Editions has been piecing together a Road to the White House Tribute Issue for both major party candidates.’
He said that because the polls gave Clinton a clear lead, it was decided that only her edition would actually be published.
He added: ‘Unlike hard news magazines, commemorative editions for sporting events, elections and unfortunately deaths are created weeks, months, and even years in advance.’

The Hillary editions are now being recalled and pulped. On Wednesday, after Trump was declared president-elect, President Barack Obama said he was rooting for Trump’s success.But during a nine-minute address in the White House Rose Garden, his clearly devastated staff didn’t look so sure. With Vice President Joe Biden at his side, a sometimes smiling but always composed Obama said Tuesday’s election in which his party’s nominee lost the nation’s highest office was a setback for his agenda but not for the nation.
‘We are now all rooting for his success in uniting the country,’ he said.