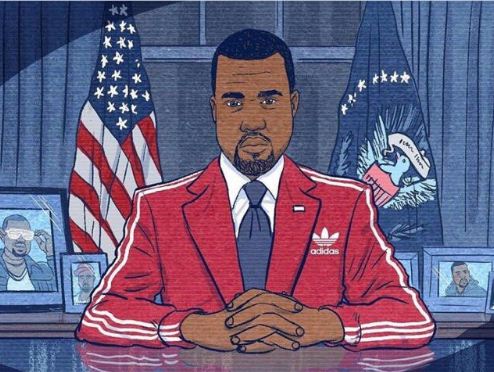 Shortly after controversial tycoon Donald Trump was declared president-elect, Hip Hop fans on Wednesday took to social media to urge American rapper Kanye Omari West to run for office come 2020.
Kanye West, 39, who had earlier on announced his interest in running for Presidency during the MTV Video Music Awards in 2015, and reiterated the same also during an interview on BBC Radio 1 year later, saying: “When I talk about the idea of being president, I’m not saying I have any political views. I don’t have views on politics, I just have a view on humanity, on people, on the truth. If there is anything that I can do with my time and my day, to somehow make a difference while I’m alive I’m going to try to do it.”
His fans believe that anything is possible after Donald Trump was elected president in the shocking 2016 election on Tuesday.
#kanye2020 began trending on Twitter, with fans flooding social media urging West to “save them.”
@abicmorris wrote, “There’s only one man who can save us now #kanye2020 #ElectionNight…”
@BRIANxSEASON wrote “We about to go from the worst president ever in 2016 to the best president ever in 2020. #KANYE2020…”