M#Myareavibe| Here’s why Wizkid is our favourite star.

Here are reasons everyone can’t get enough of Nigeria’s own Starboy.

We can boldly say 2016 is the year of Wizkid.
Popularly known as Africa’s most recognised and successful artiste of the year, Wizkid has crossed several continents this year.

Here are reasons everyone can’t get enough of Wizkid:

Literally everything Wizkid touched this year turned to Gold. How he did it nobody knows!

The singer is currently vying for the award of most travelled African star and was recently touring Europe in the company of Chris Brown before going to the Dominican Republic, to record and shoot a video with Tinie Tempah, titled ‘Mamacita’.

No one can argue this! C’mon his music has even earned him recognition across Africa. Enough said!

Just look at this picture!
4. He’s rich
Wizkid is rich! All those endorsements and features has earned the singer a lot of cash – the main reason why girls are after him.
5. But still calm
Not like some people that will be breaking bottle everywhere…..
6. And isn’t all over our faces on social media
Thank you Wizzy! Thank you!
7. Let’s not forget he has this never-ending love for his fans 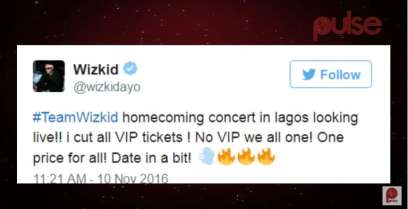 He’s hosting a ‘free for all’ concert this year at the Shrine and on the Island.