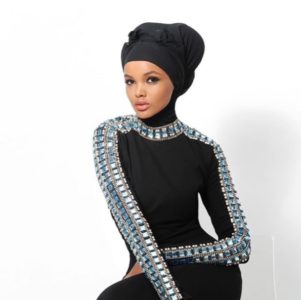 In the  midst of all the tension regarding immigration policies in the U.S., a young woman is breaking some barriers in the Fashion world. Halima Aden, a 19 year-old Somali-American, born in a Kenyan refugee camp, has just signed with the famous modelling agency IMG.

Her first major catwalk was on the stage of controversial designer, Kanye West for his Yeezy presentation in the 2017 New York Fashion Week. But Aden first made headline in 2016 when she competed in the Miss Minnesota USA beauty pageant wearing a hijab throughout the show, and a burkini during the swimsuit portion.

“I wanted to spread a positive message about beauty and diversity,” she told Business of Fashion, “and to show other young Muslim that there is room for them.”

In an industry that is known for body’s overexposure , Halima Aden is definitely a trendsetter willing to challenge beauty standards and sticking to her beliefs. This shows little girls and young women, Muslims or not,  that they don’t have to dress scantily to be beautiful.