Family auction ‘virgin bride’ on Facebook selling her to a businessman for 500 cows, three luxury cars and £7,500 before she is dubbed ‘the most expensive woman in South Sudan’ By Reuters 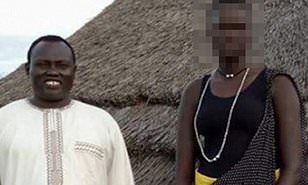 The highest bidder, a businessman, married the teenager on November 3

A picture of the 17-year-old, who is from South Sudan’s Eastern Lakes state, was posted on Facebook on October 25.

The post said five men were participating in the auction for her dowry.

The highest bidder, a wealthy businessman, reportedly gave the girl’s father over 500 cows, three luxury cars and $10,000 as a dowry, according to major girls’ rights charity Plan International.