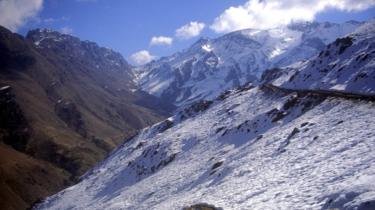 Two Scandinavian women tourists have been found dead in Morocco with cuts to their necks, the country’s interior ministry has said.

The bodies of Louisa Vesterager Jespersen and Maren Ueland were found in the High Atlas mountain range.

The families of the two women, from Denmark and Norway, confirmed their identities on social media.

A suspect has been arrested in the city of Marrakesh on suspicion of murder, according to Moroccan authorities.

The man was being held in custody “to determine the motive of the crime while investigations continue”, the central bureau of judicial investigation said in a statement. Two further suspects were arrested later, according to Moroccan reports.

The women had been sharing a tent 10km (6 miles) from the mountain village of Imlil and their bodies had been found inside the tent on Monday, near the foot of North Africa’s highest peak, Mount Toubkal, reports said. The area is popular with hikers and climbers, particularly from Scandinavia.

Maren Ueland, 28, from Norway had travelled to Morocco on 9 December with Louisa Vesterager Jespersen, who was 24 and from Denmark.

Maren Ueland’s mother Irene told public broadcaster NRK that the pair had been studying together at the University of South-Eastern Norway and had gone backpacking for their Christmas holiday. Read more