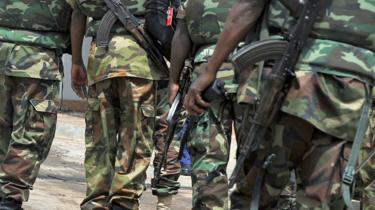 The Nigerian army says it raided the offices of the private Daily Trust newspaper for “undermining national security” by reporting about a planned operation against militant Islamists.

The article “put troops in imminent and clear danger”, it said in a statement.

Two reporters at the newspaper’s office in the north-eastern city of Maiduguri, the epicentre of the Boko Haram insurgency, were arrested.

Daily Trust condemned the raid and asked for its staff to be released.

The newspaper reported on Sunday that an offensive was being planned to retake control of territory captured recently by militant Islamists in north-eastern Borno state.

The army said it did not intend to muzzle the press, but it was forced to act because the newspaper had divulged “classified security information”.

“It afforded the Boko Haram terrorists prior notice of our plans and giving them early warning to prepare against the Nigerian military, thus sabotaging the planned operations and putting the lives of troops in imminent and clear danger,” the army statement said.

Daily Trust editor-in-chief Mannir Dan-Ali said the raids on the newspaper’s offices in Maiduguri and the capital, Abuja, were “unlawful”.

The soldiers sent away staff from the offices and ransacked the newsroom and carted away dozens of computers, he added in statement. Read More