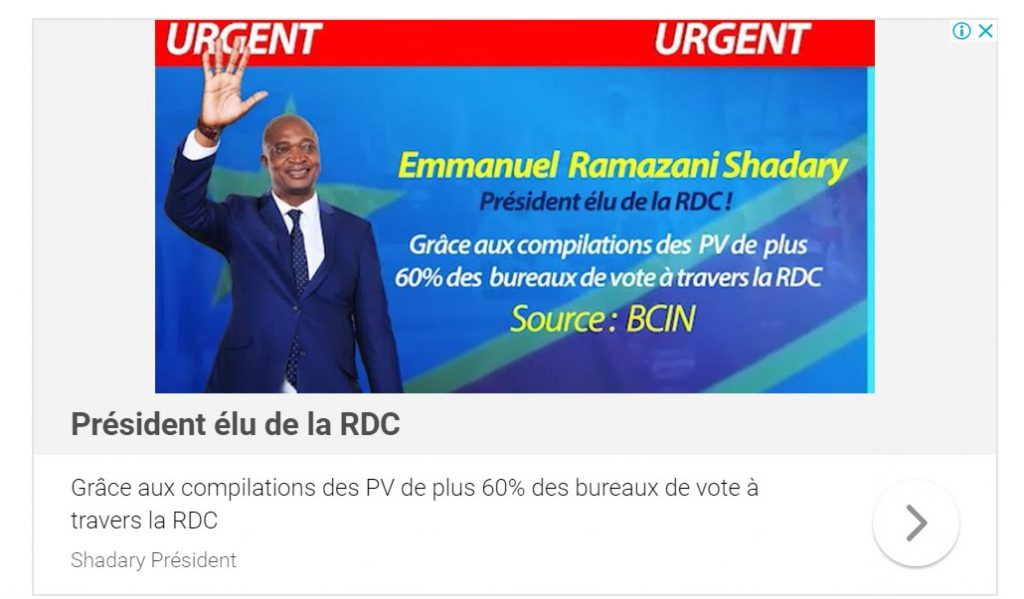 A US professor at Massachusetts Institute of Technology (MIT) is accusing technology giants Facebook and Google of promoting false information on their platforms about the presidential elections in the Democratic Republic of Congo.

In a post on Medium Ethan Zuckerman shared screengrabs of advertisements on the two platforms declaring Emmanuel Ramazani Shadary, the ruling party’s candidate, as the winner.

The electoral commission said provisional results of last week’s election were delayed because less than half the ballots had arrived.

The authorities have promised credible elections.

Mr Shadary and opposition politicians Martin Fayulu and Felix Tshisekedi are the main candidates in the race to succeed Mr President Joseph Kabila.

The influential Catholic Church, which deployed 40,000 observers during the 30 December election, said that it knows who won the election. Its statement has been condemned by officials in Mr Kabila’s government.

The government has also limited internet access in the country.

“So why are ads on Google and Facebook, apparently targeted towards internet users in DRC’s neighbor, Congo-Brazzaville, declaring Emmanuel Shadary to be DRC’s new president?” Mr Zuckerman asked in his post.

“Facebook and Google’s powerful ad systems may be being used to reinforce election fraud, either by targeting these ads to Brazzaville or to DRC itself, where a small number of people are still on the internet,” he added.

He said that he is collecting similar images so that “we can ask Google and Facebook to prevent the transmission of false information that could be used to cement a stolen election”.