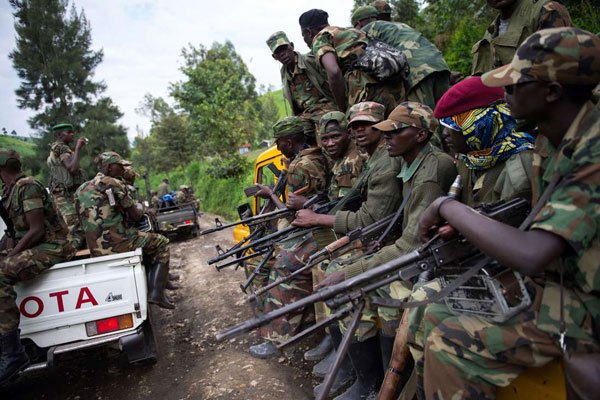 Six hundred Congolese rebels whose conflict killed several thousand people in the restive Kasai region, have ended their war and surrendered their weapons in a sign of support for new President Felix Tshisekedi, local authorities said on Saturday.
Tshisekedi was sworn in on Thursday as president of Democratic Republic of Congo, marking the country’s first peaceful handover of power after chaotic and bitterly disputed elections.

“These 600 militiamen responded to our appeal for peace. We have a new president and we should all support him. We call on those who are still in the bush to also hand over their weapons,” said local governor Denis Kambayi.

Authorities estimate around 1,700 militia fighters were operating in the area.

Several thousand people were killed between 2016 and October 2017 in four provinces during an insurgency by the Kamwina Nsapu (Black Ant) militia, named after a leader killed in a security force operation in August 2016.

“We have handed over our weapons because for us the war is over. The people have taken power with the election of Felix Tshisekedi, so for us there is no more justification for war,” said Raphael Kabeya, a local militia commander, told AFP.
Kamwina Nsapu was a tribal chieftain who opposed the Kinshasa government and his rebels battled government forces and the pro-government Bana Mura militia.

Beyond a death toll which UN sources put at some 3,000 — including two UN experts sent to investigate the conflict — the rebellion displaced around 1.4 million people.

Kabeya called on a rival militia Bana Mura to also surrender their weapons and end fighting as part of a reconciliation.
Another militia group also surrendered in neighbouring Tshikapa region, witnesses told AFP.

Militia tensions in the central region and fighting in the country’s troubled east were among the complications in December’s elections to replace President Joseph Kabila that were marred by repeated delays.

Tshisekedi on Friday turned the spotlight on human rights in his first day in office after succeeding Kabila who was in power for 18 years.