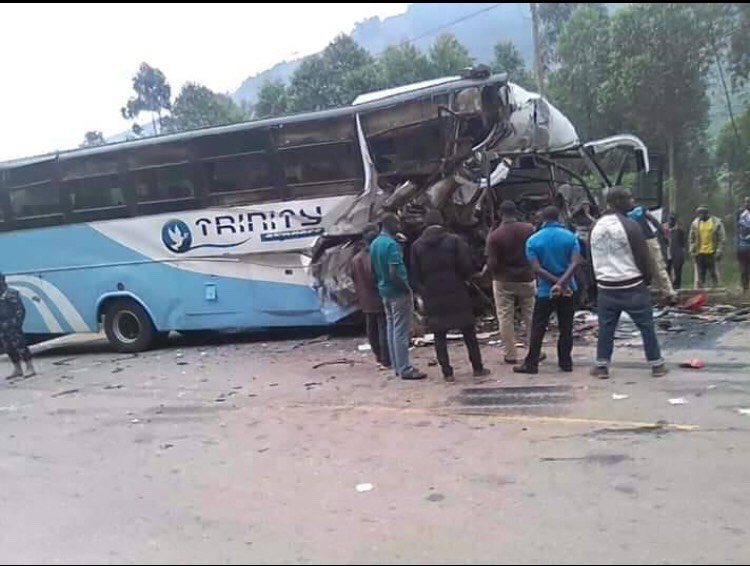 Two people have died on spot while 13 sustained serious injuries after a semi-trailer lorry collided with a Kigali bound bus at Konyo trading centre about 3km from the Uganda-Rwanda border town of Katuna.

The officer in charge of traffic police IP Andrew Muyambi said the accident happed at around 4am on Saturday morning when the bus UAX 486X Scania belonging Trinity Buses that was heading to Kigali in Rwanda collided head on with the semi-truck – a Marcedes Benz Bu-D 7720A from Burundi that was heading for Kampala from Katuna.

Mr Muyambi identified the deceased as Michael Mwaka 49 from Acholi and Anthony Kalakwa 33 from Ibanda all drivers of the bus and the semi trailer respectively.

He said that the preliminary cause of the accident was reckless driving by the semi-trailer lorry that kept driving on the right side instead of the left as per the traffic regulations of Uganda.

“I appeal to all drivers crossing into Uganda to be reminded of driving on the left hand side unlike in Rwanda where they drive on the right side. Please change the side of driving immediately after entering Uganda,” Mr Muyambi said.

He explained that 12 passengers that were seriously injured were travelling in the bus while one was a turn-man of the semi-trailer.

Mr Muyambi said about 30 passengers from the bus that were not injured boarded different means of transport and proceeded to Kigali.

In early 2000, 49 people died on the same spot after the bus they were traveling in from Kigali to Kampala collided with a lorry.