The Nigerian Dancehall Star Mr. RunTown the hitmaker of “Gallardo”.

The Internet is going crazy after a  UK  based Model know as Goddness Jamila posted on Instagram username: Goddness.Jamila saying she’s 3 months pregnant for RunTown.

Godness Jamila took it to IG and posted the pic of an Utra scan as a proof also called him out for not answering her calls or replying her texts messages since he left her in U.K after his birthday. 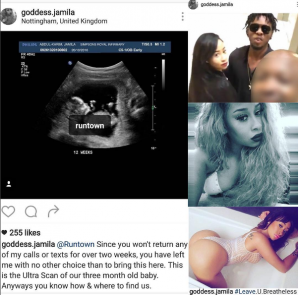 Goddess Jamila caption on Instagram “Since you won’t return any of my  calls or texts for over two weeks, you have left me with no other choice than bringing this here. This is the Ultra Scan of our three month old baby.”

What you guys think about this story? Is she making things up? Maybe this is RUN TIME for RunTown or Run Away Time for RunTown?.