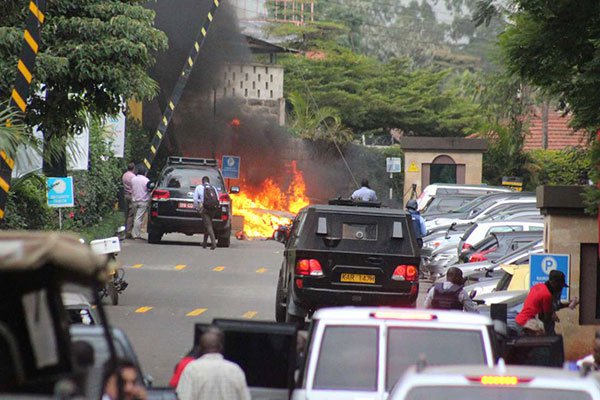 “DusitD2 Nairobi is a vibrant city hotel retreat where style, entertainment and art converge. Cocooned away from the city’s hustle and bustle and in a secure and peaceful haven off the leafy suburb of 14 Riverside Drive, it is just minutes from the central business district and merely a stone’s throwaway from the heart of Nairobi’s pulsing social scene,” the hotel’s website says.

“With unique spaces that balance a modern yet timeless aesthetic in an intimate boutique setting, DusitD2 Nairobi is the very definition of contemporary chic.

“Offering world class cuisine from its array of bars and restaurants, stylish and spacious guestrooms, unique event spaces, the award winning Deverana Spa and a striking red swimming pool, DusitD2 Nairobi is the perfect urban retreat for both work and play,” it goes on, perhaps providing some clues on why the heartless bunch of terrorists could have targeted the five star hotel-cum-office block on Tuesday afternoon, killing 14 people.

Situated on 14 Riverside Drive, DusitD2 is perhaps one of the few hotels in Nairobi that share neighbourhoods with three Western embassies — Australian, Dutch and German — making it a popular haunt for Western diplomats and affluent Kenyans.

According to Abdullahi Abdille of the International Crisis Group (ICG), the proximity to the three Western embassies could have informed the choice of the hotel as the ideal target, given the international attention it was bound to create.

“You realise since the Westgate attack, the terrorists have never raided Nairobi, choosing to concentrate their attacks in the northern counties such as Mandera and Garissa and to an extent Lamu.

“These attacks have not yielded the attention they normally crave, so it was only natural that they hit a target in Nairobi for maximum attention, and what better target than a hotel in a neighbourhood teeming with Western embassies?” he noted.

The architectural design of the hotel, with its single drive way, making it very difficult for two vehicles to drive in and out of the complex simultaneously, may have also made it an ideal target for the terrorists as it hindered the free movement of security forces, giving the terrorists ample time to carry out their heinous acts.

Mwenda Mbijiwe, a security expert, however expressed surprise at the choice of the hotel, maintaining that it was not a smart target. “I am seeing a Jewish nexus in the whole attack,” he said.

“I am really baffled at the choice of the hotel as a target, even the mere fact that they only managed to kill 14 people, going by the official figures.

“The fact that our security forces managed to evacuate more than 700 people should tell you that the attack failed miserably,” he added. Read more