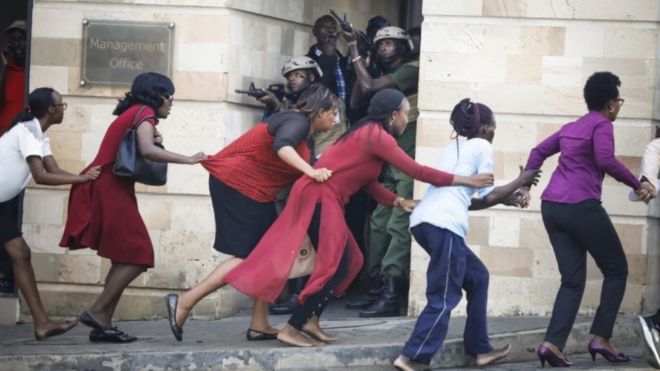 About 700 people survived an attack by gunmen on a compound of offices and a hotel in Kenya’s capital. The siege, which began at 15:00 local time on Tuesday, lasted 19 hours.

Here’s how some of them escaped from the al-Shabab attackers:

‘Crammed in a toilet’

Two journalists working for national broadcaster NTV found themselves caught in the siege for more than 12 hours.

“We are crammed inside the toilet with a number of guys,” messaged reporter Silas Apollo to a WhatsApp group with other journalists while hiding. “I’m very scared.”

“They have been combing the building and shooting aimlessly. It’s too scary to imagine,” he posted on WhatsApp.

They told Kenya’s private Daily Nation newspaper that they, and at least 14 others trapped with them, had to change positions moving from the toilets – sometimes crawling, lying on the floor or standing – to the main hall.

They were eventually rescued from their office block at 03:15 local time on Wednesday.

Ronald Ng’eno was in his office where he worked as a communications officer for the Commission on Revenue Allocation when he heard “a massive blast followed by unending gunshots”, he told AFP news agency.

He and his colleagues tried to escape but realised the gunmen were already inside.

“They started firing directly towards us and that was when we changed course and ran into the bathrooms located on first floor. Upon entering the bathroom I saw a small opening on the ceiling and that’s where I hid momentarily,” he told AFP.

We were crammed in the bathroom and we had to be very quiet, he told the BBC.

At around 19:00 local time, as gunfire was heard in the vicinity, Mr Ng’eno tweeted that he was still stuck in a bathroom: Read more