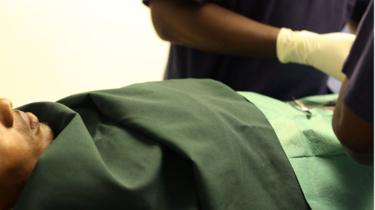 A female MP in Tanzania has called for checks to determine whether or not her male colleagues have undergone circumcision – a procedure known to reduce the risk of HIV transmission.

Jackline Ngonyani said any MPs found not to have been circumcised should be required to undergo the procedure.

Her suggestion divided opinion among her colleagues.

HIV is seen as a major threat to public health in Tanzania. Around 70% of the male population is circumcised.

Around 5% of Tanzania’s adult population is believed to have been infected by HIV – giving it the 13th highest rate of infection in the world, according to figures from 2016.
The World Health Organization (WHO) says circumcision reduces the risk of heterosexual men contracting HIV by around 60%.

Several African countries that are fighting HIV epidemics have launched campaigns to encourage men to undergo the procedure, which involves surgically removing the foreskin from the penis.
Ms Ngonyani made the comments during a debate in parliament about how to curb the spread of HIV in the country.

Her suggestion was backed by MP Joseph Selasini.

In neighbouring Kenya, some top politicians voluntarily submitted to the procedure in 2008 as a way of encouraging men from their communities to do the same.